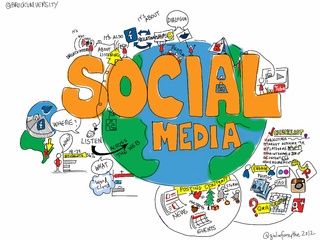 Just as you always suspected, there are no real people on any social media platforms anywhere, anymore. They are all bots of one sort or another — or Russians, which don’t really count as human anyways, do they?

The prestigious Grober Zeitverschwender Institut of Berlin, under the direction of Herr Pinscher Dobermann, released a sixty page Off-White Paper this week that demonstrated beyond a shadow of a doubt that even your mother, wishing you a Happy Birthday on Facebook, is not your mother at all, but a birthday bot that routinely collects data on birthdates for companies like Amazon and Procter & Gamble — and then sends out appropriate, gender-specific, birthday greetings, always with a subtle commercial message, such as “Hope you use Wilton brand candles on your cake, sweetheart!”

According to the Institut, the last known genuine human being to log on to any social media account was Sandra Scrimshaw Wisnowski, of Schenectady, New York, back in 2016. She posted on Quora, asking “How can I remove hair from my belly button?”  She was quickly taken down by a SWAT team, and since then the algorithms have taken over, along with the bots, to post cute pet pictures, create sextortion, concoct all those crazy Donald Trump tweets, and generally fill cyberspace with the traditional ‘nattering nabobs’ of the underated communications savant Spiro Agnew.

Herr Dobermann is quoted as saying “Today social media is as sterile as a hermit’s guest bedroom. It is full of nothing but echoes and the ‘sound and fury signifying nothing’ of Shakespeare’s play Macbeth.”

(This post was written by bots for bots — or Russians, da?)