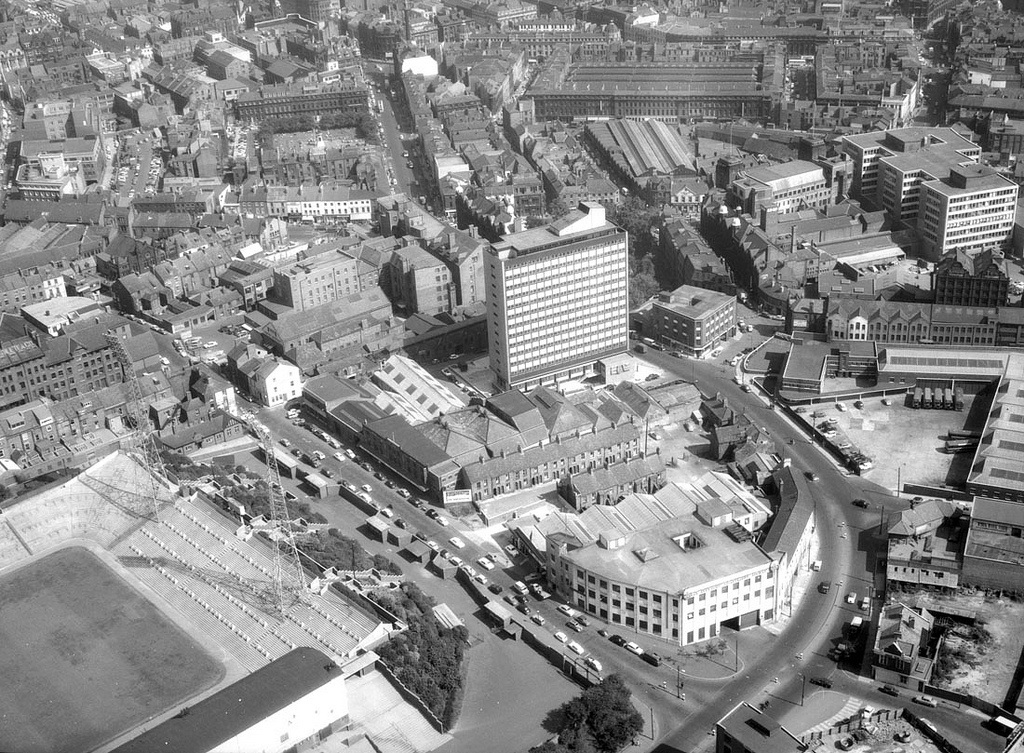 A few months ago (December 1, 2017) I dropped the little bomb about Tiny Asset Engines (TAE):

Well, I’m going to reveal what they are and how to build ’em in this article.

Firstly, what they are?

As the name suggests, they’re “assets”:

In other words, something that has a store-of-value, like “money,” real estate, art, precious metals (gold, silver), etc.

Stick with me here cos this is important.

Problem with stuffing money under your mattress (or in your bank) is that over time it LOSES “value” (through inflation).

Money, by itself, doesn’t INCREASE in value over time. It does the opposite.

Real Estate (typically) increases in value, but only when the asset is sold. If you live in a property for life (meaning, it’s not an investment vehicle), it also doesn’t pay you back, per se.

(Unless you rent out an investment property.)

Gold and silver too. It increases in value because it’s rare and supply is limited (unlike the paper Fiat currently which is backed by nothing but a promise and a smile, and which gets printed on-demand).

However, precious metals, like with art (or your primary home), are “stored value” until you sell them (capital gain).

Tiny Asset Engines (TAE) on the other hand produce income that gets realized into your bank account every month (or every week).

Month after month, year after year.

That’s almost 13 years of monthly earnings from just ONE asset.

I (now) do nothing else to receive these asset payments.

I could move to a remote island in the South Pacific with no internet and still receive those commissions each month.

(GBP is Great British Pound, which is approximately $2,300.)

The numbers aren’t massive, but they’re all recurring revenue. And we have a lot of these assets working for us (some a lot larger, some smaller).

DISCLAIMER: Like nurturing a plant, some maintenance is required for the asset to grow and flourish.

Okay, so they’re an asset.

But what are they exactly?

Hold on there, tiger … not so fast.

Gotta back up a little first.

The underlying premise baked into a TAE is that they help solve a problem.

And problems are solved when the right solution matches the needs of a POP (pocket of people) — an audience — perfectly.

And by perfectly I mean that it solves a real problem, not just a symptom of a problem (like a bandaid fix).

And the best vehicle in the world to deliver solutions to real problems is through affiliate marketing.

Yeah, the spammers, the MLM’ers, the CPA (cost-per-action) and the biz opp (business opportunity) marketing scene; they’ve all given affiliate marketing a bad image.

There’s always going to be bad shit out in the world. Those a-holes looking for easy opportunities to prey on the needy and desperate. It’s disgusting, but it happens.

Just because drug dealers use money to peddle death and depravity, doesn’t mean money is bad. Or cryptocurrencies.

Affiliate marketing is the path of least resistance to quickly building a Tiny Asset Engine (TAE), WHEN DONE RIGHT.

Which brings me nicely to the next point.

As affiliates we have the perfect unique opportunity to ADD VALUE to the transaction; to the merchant’s offer.

You should read that last part again. It’s the leverage point. It’s the “magic fairy dust.”

This is where what I do diverges from the norm. From what 99% of affiliates do. Where everyone else is zagging, I go the other way and “zig.”

And the damn beautiful thing is this…

So long as most people (the 99%) seek quick fixes that focus on the easy and fast (read: copying the herd), us 1% get to stand out, kick ass and chew bubble gum.

On a high-level, a Tiny Asset Engine (TAE) is:

You can think of the “magic” that happens much like an alcoholic cocktail.

Tequila by itself is … well … meh … an acquired taste unless you’re perhaps from Mexico. But add some fresh lime, salt, and BOOM!

It’s transformed into something magical.

White rum (Bacardi) by itself is not so great. But throw in mint, lime juice,  soda water … BOOM! … magic Mojito.

The “cocktail” is the magic combination of ingredients that ENHANCES the offer/product/solution/service.

Listen to this (very short) audio snippet of what Matt Gallant thinks about value adding “cocktails” when I shared it with him:

(Matt was referring to AutoResponder Madness in that conversation because in ARM I have a section on “cocktails.”)

A Tiny Asset Engine (TAE) can be created around any product or service. I’ve built ’em to promote info products, online services, and even physical products.

But my favorite TAE’s are always wrapped around monthly recurring services (like SaaS; software-as-a-service). They last the longest. And there’s literally 1000’s of them online.

Website hosting, for example, is probably the most common one (and most competitive).

In contrast, for example (hint hint), wrapping a TAE around a service like Deadline Funnel (monthly or yearly recurring), offers the most leverage. Because it’s easier to add value (the cocktail), and there’s less competition.

I had only been working online for around 18 months at this point.

At the time Frank Kern and Ed Dale had been indoctrinating the ecosystem with their Underachiever Method (build fifty info businesses that each earn $1K-2K per month).

Rich Schefren had gone all in building these little info businesses.

I had decided two strategic things back then:

So I had decided to build TAE’s around some of these products. One such product was a baby modeling info product that Rich Schefren had created and was selling:

I didn’t know Rich personally back then but had been through his Business Growth System.

I started to generate sales for Rich.

Around the same time, I had built another TAE in the “office cleaning” space. I was building a lot of TAE’s in every market you could think of

So at the Underground Seminar, Rich flagged me down and invited me for lunch with him.

Being a shy introvert, I was a little overwhelmed.

Rich asked what I was up to. Told him I was building little sites to ENHANCE merchant offers.

People had figured out that it was unsustainable trying to build 50 little info businesses, each earning one or two grand a month.

So my baby modeling TAE had its revenue channel shut down. Which sucked.

So what did I do?

The obvious solution was to find another competing offer, but sadly I couldn’t find any. So I tweaked the site a little and slapped on AdSense.

I was kind of amazed at how well AdSense had worked for that TAE (a four-page website). Almost instantly I was earning between $20 and $100 per day.

On average that little TAE earned me around $1,000 per month. For five years! And I never touched it. Not once.

Back in 2013, I was chatting to my buddy, Seth Ellsworth.

He had become an Infusionsoft fanboy, so over one weekend he built a little website which helped people decide between Infusionsoft and ONTRAPORT: 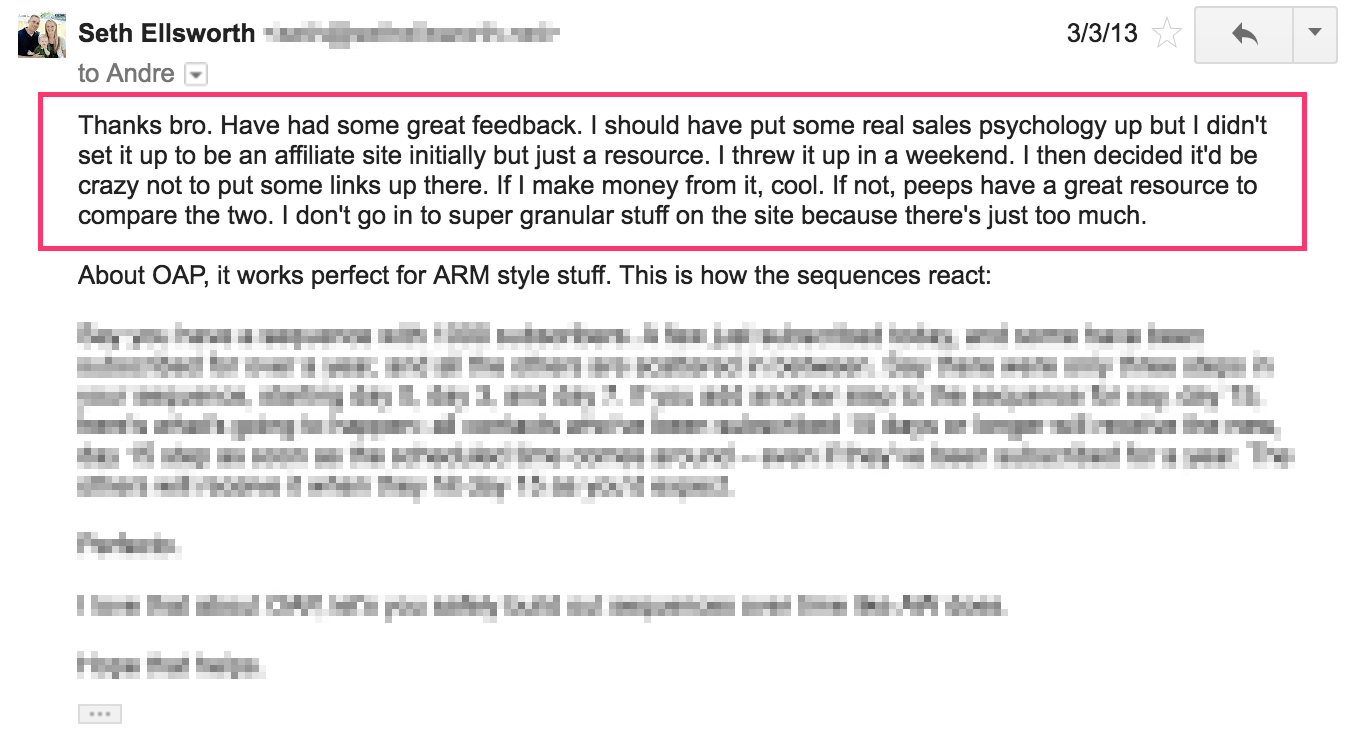 A little over a year later I asked Seth how his little website was doing:

He had become the #1 affiliate for Infusionsoft. His little TEA was producing around $10K per month.

Four months later I asked Seth what had happened with the site: 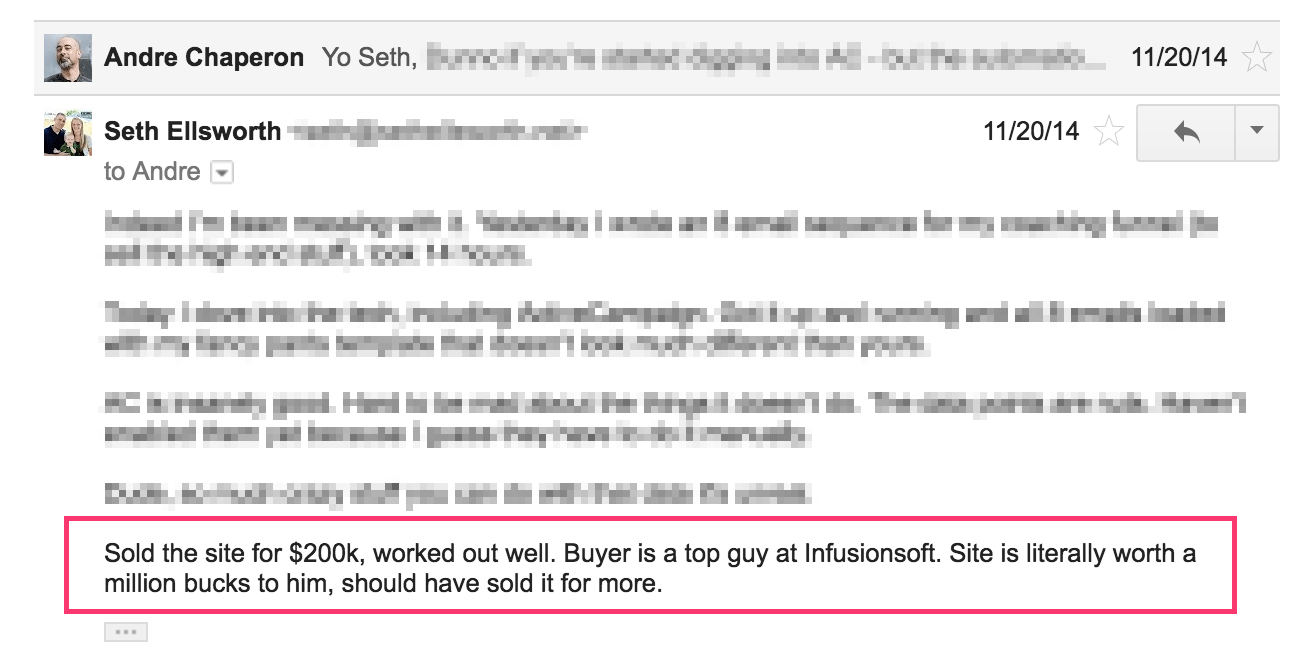 So yesterday (Friday, Feb 9) I checked to see if the site was still up. It was. So I buzzed Seth again.

Apparently, Seth had acquired it back from the Infusionsoft guy a few years later. That little site is third hand now. lol

I asked Seth if I could share the URL, and he said sure:

(Seth says he’s open to selling it again. So if you’re interested, find him on Facebook and let him know.)

I’m sharing that link not because I want to help Seth sell it, but rather to show you what a Tiny Asset Engine (TAE) can look like. And how much money they can make.

The other week I shared a link to our latest product, Sphere of Influence (SOI):

On page 4 I cover how I build a Presell Site:

And yup, a presell site is what can become a TAE (Presell Sites have many different objectives, of which a TAE is one).

Some of my TAE’s simply linked to the merchant’s website (offer).

(The CTA button in the image above could be a squeeze (opt-in) form, or an affiliate link to an offer, or just a direct link to another website of yours.)

In fact, I would “direct link” initially to quickly test whether my presell copy was doing its job well.

Sometimes I would cut the merchant out altogether, by “bypassing” their (crappy) sales page and linking DIRECTLY to their shopping cart (through my affiliate link of course).

In this scenario it was almost as tho I was the merchant (very powerful btw!).

I would attract a POP (via organic and/or paid traffic), used my PS (Presell Site) to shape the installed beliefs of said POP, then present them with a solution to their problem that “clicked” as being PERFECT for them (the merchant’s product).

And most times I would build in extra value and leverage through the cocktail ENHANCEMENT (a unique bonus).

Here’s one example I created around an info product that I loved (this example has the cocktail addition). 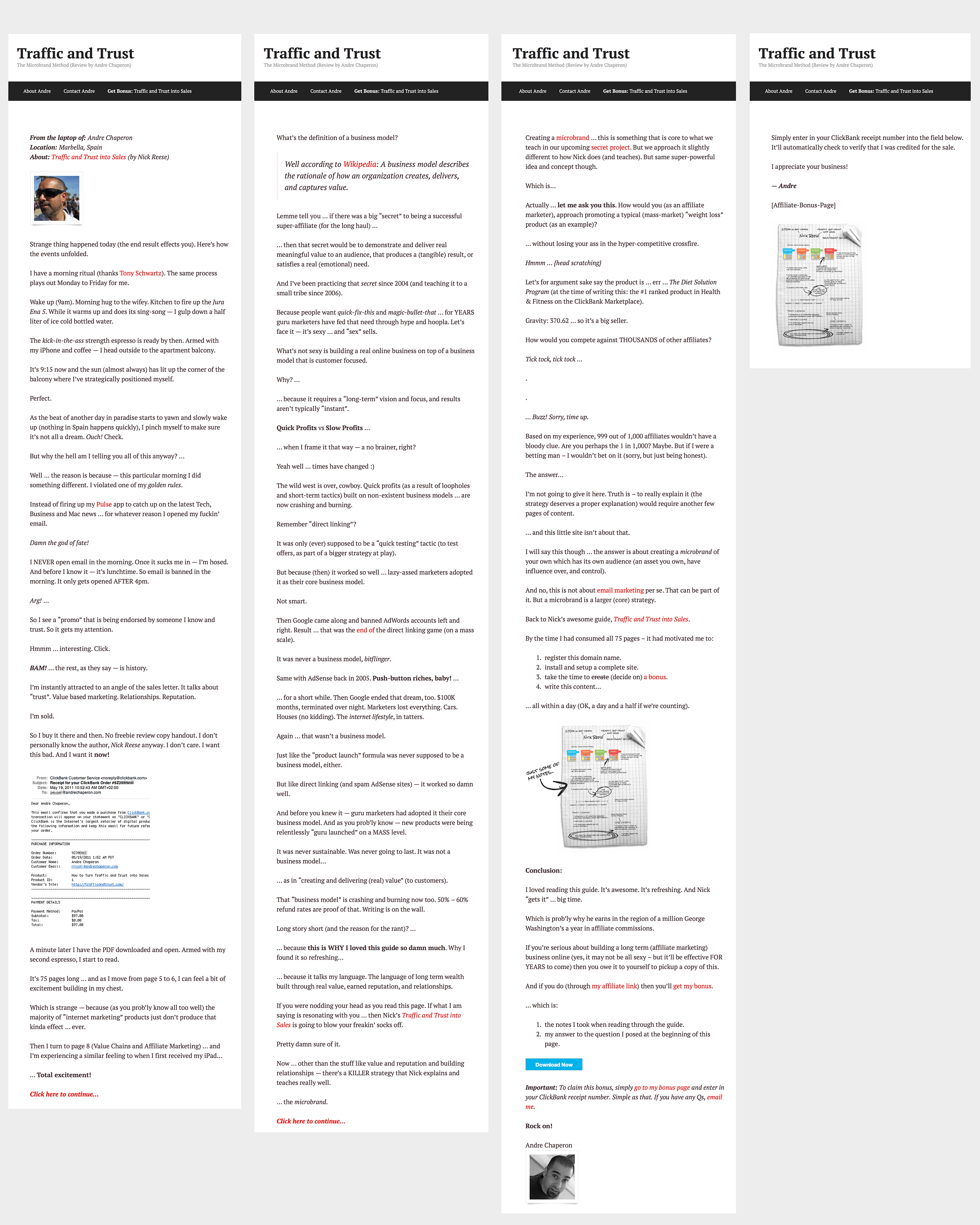 I built that in May 2011. I had that site up for a few years, then took it down. I took it down because the merchant offer was old and a little dated.

The cool thing is that I had automated the entire process. From linking to the TAE from within my various soap opera sequences, to the delivery of the bonus (cocktail).

You’ll notice that on the fourth page above (the bonus page), there’s a short-code showing. That shouldn’t be there. The script I was using no longer works.

It used to be a form field where customers would paste in their ClickBank ID, and the script would connect to my ClickBank account and verify if I was credited for the affiliate commission.

If I was, it redirected them to a download page where they were added to my customer email list and sent the bonus.

I had email automation setup for customers which would nurture them, and recommend other services connected to the offer.

Okay, so let’s recap again about what makes up a Tiny Asset Engine, and how I build them:

If you want to learn how to go DEEP into the strategy of building Tiny Asset Engines (a version of a multi-step presell site) I cover this in our new course, Sphere of Influence (SOI).

SIDE NOTE: I’ve never bought into marketing that focuses around the lure of hacks and loopholes and “secret” tactics.

For me, if what I was doing didn’t have a long-term strategic shelf-life, I didn’t do it. I refused to go down that rabbit hole.

Which is why ARM (AutoResponder Madness), SOI (Sphere of Influence) and using both to build TAEs (Tiny Asset Engines), has never stopped working for me.

They’re all evergreen strategic methodologies that will continue to work just as well (if not better), in five and tens years time.

Stephen Snyder emailed me a few days ago:

Now pay attention to what he says about Facebook and Google below:

Whether what I teach within SOI becomes the de facto standard for creating front-end assets, is irrelevant really. It has served me well for over a decade, and I know with absolute certainty it’ll continue to serve me well into the future.

If you see the value in this way of operating, as a next step, I suggest you read the (long) presell site I built for Sphere of Influence:

It continues from where this article has left off.

NOTE: I cover the next Episode in SOI; a new better way of building squeeze (opt-in) pages. Till then.