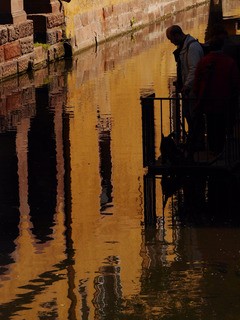 Craig David Ross is an American guitarist best known for performing and recording with Lenny Kravitz.[1]

Craig Ross was born and raised in Los Angeles, California. He has two daughters named Mia and Devon with his first wife Anna. Since 2014, he has been married to Spanish actress Goya Toledo [2][3]

Craig Ross picked up the guitar at age eight.[4] That first guitar, borrowed from a neighbor’s garage, was his foray into the world of the Beatles and Chuck Berry, his early influences.[4] Before the age of sixteen, he started playing the L.A. clubs and eventually formed the band The Broken Homes while in high school, and going by the stage name Kreg Ross. They opened for the legendary Stevie Ray Vaughan, INXS, and Jerry Lee Lewis, among others, while doing clubs gigs with bands such as Guns N’ Roses and Jane’s Addiction. The band made three records for MCA records in the 80’s, working with producers such as Andy Johns of Zeppelin and Stones fame. This seminal period gave Craig his education in studio work.

A ‘chance meeting’ in an L.A. pool hall with Lenny Kravitz (facilitated by Kathy Valentine of The Go-Go’s) shaped the course of his career for the next 13 years.[4] After touring with Kravitz for 1991’s “Mama Said”, Craig joined Lenny in the studio, co-writing and playing all the guitars on the track “Are You Gonna Go My Way”, an anthem that helped elevate Lenny’s career to new heights. The collaboration continued with stand-out solos on tracks such as “Believe” and “Is There Any love in Your Heart” helping make Lenny a top rock act. Craig has written and played on every subsequent Lenny album since as well as records by Sheryl Crow, Mick Jagger, B.B. King, Eric Clapton, The Black Crowes, Nikka Costa and others.

Ross co-wrote the songs “Spinning Around Over You”, “Are You Gonna Go My Way”, “Is There Any Love in Your Heart”, “Where Are We Runnin’?”, “Stillness of Heart”, and “Lady” with Kravitz, as well as numerous songs on Kravitz’s 2008 release It Is Time for a Love Revolution. Also in a side band call Honky with Mark (muddy) Dutton and T. Grier before joining Lenny

Craig appeared as a guest guitarist on the band Spoon’s performance on the television show Austin City Limits. The episode premiered on PBS on October 9, 2010. He appeared on the song “Nobody Gets Me But You” and as co-guest guitarist with Charlie Sexton on the song “Who Makes Your Money”.