The earliest recorded examples of Fake News go back to the ancient Egyptians in the 13th century (probably something about how they didn’t know who built the pyramids either). The recent interest in Fake News was sparked by the election of Donald Trump in November 2016. Prior to the election there were relatively few articles about Fake News, afterwards, as evidenced by the number of Google searches and social engagement, there was an explosion in articles and in public interest in Fake News.

In this post, we take a look at the articles discussing Fake News, examine whether we could have predicted there would be such overwhelming interest, and set out some key takeaways to consider when looking at content trends.

Immediately after the 2016 US presidential election, Buzzfeed researchers discovered that the top 20 Fake News stories about the election received more social engagement on Facebook than the top 20 news stories from 19 major media outlets.

Fake News quickly became a mainstream term, and a major topic of debate.

The term ‘Fake News’ is used on both sides of the political debate. On the one hand it is used by those who claim Fake News articles helped contribute to Donald Trump’s election victory. Equally it is used by Donald Trump himself, and his supporters, who refer to the ‘Fake News’ mainstream media.

The Number of Articles Published About Fake News

Using BuzzSumo data we have charted the number of articles published about Fake News for the period January 2015 to May 2018.

From the chart below we can see there were relatively few articles about Fake News being published prior to 8 November 2016 when the US presidential election took place.

The increase in Fake News articles appears to coincide with a jump in interest in the topic from November 2016 as measured by the Google search volumes seen below.

In terms of social engagements (shares, likes and comments) with articles about Fake News we can see a very significant increase in November 2016. 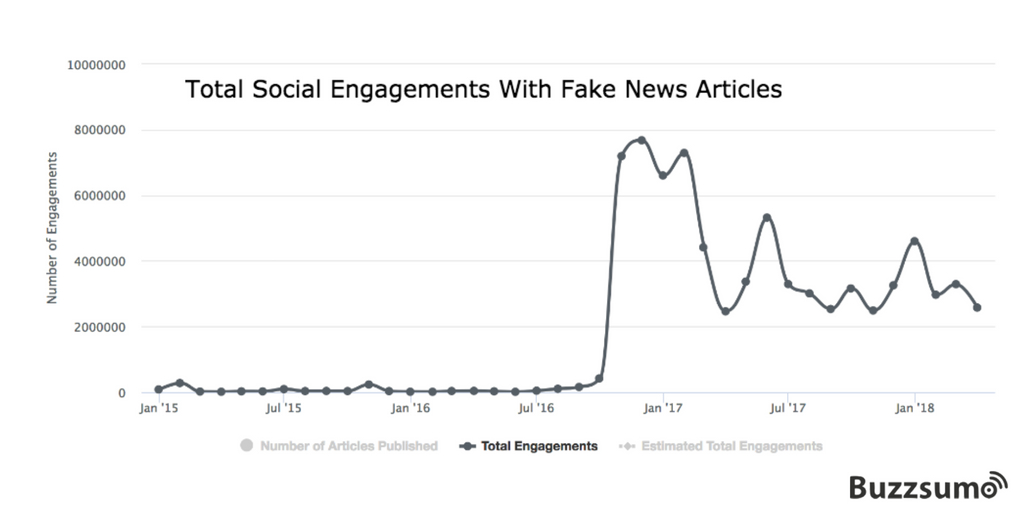 This surge of interest in the concept of ‘Fake News’ from politicians, journalists, regulators and the public has led to over 200,000 articles being published about the topic and these have gained over 79m social engagements so far.

The number of articles in the run up to the election may have been small but they were rising and so was the social engagement, Below we have broken out these articles along with the level of social engagement. 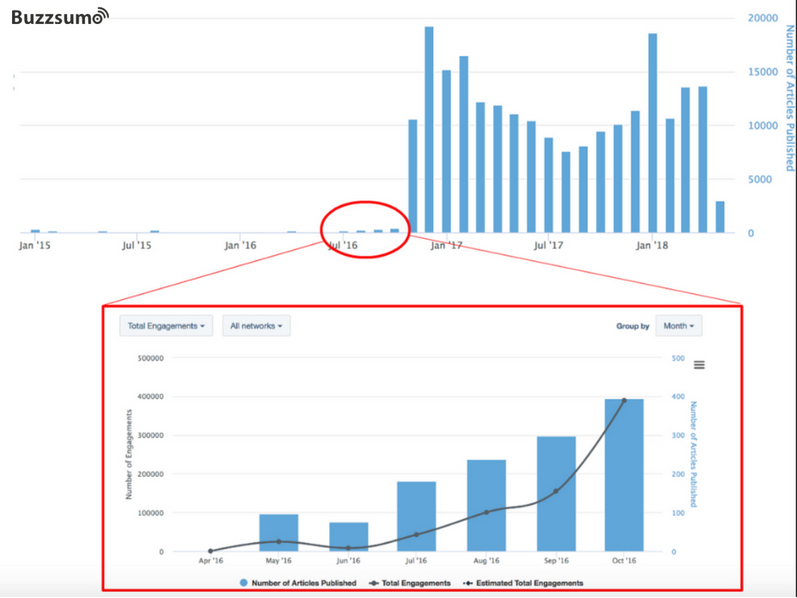 By October 2016 the number of articles published about Fake News grew to 442. The level of social engagement was also rising sharply. The top post by CNN on ‘the plague of Fake News’ and ‘how to protect yourself’ gained over 127,000 social engagements.

It would have been difficult to predict the extent of the explosion in articles about fake news in November but as we can see interest in the topic was growing. The number of articles being published was increasing and there was sharp increase in social engagement with those articles.

In December 2016 there were over 19,000 articles published about fake news (remember that’s compared to 238 in August) and some of these gained very high levels of social engagement. The post which received the most engagement was this post by NPR on how to self-check facts, with over 420,000 engagements. There’s no doubt that mainstream news sources covering the topic helped with its virality.

As we said, if we or anyone else could have predicted this explosion, we would probably have written this article last September. It’s difficult to spot emerging trends in content, but here are some takeaways and tips for content marketers and publishers next time there’s a wave forming offshore that you want to ride:

Before adding to the slew of articles on this or any other trending topic, you need to ask

In other words: If the trend has already jumped the shark, or everyone’s drowning in content, don’t try and catch the wave…that’s true news, folks.